I have been the party’s Election Coordinator since 2014, and am asking you to re-elect me so that I can continue to work with the elections team to build targeted and successful campaigns.

It’s possible that we will see a general election within a year, maybe within a few months, and whilst the Tories and Labour Party are in turmoil following the referendum, the Green Party offers a positive solution in these turbulent times. Whatever happens to the leadership of those parties we need a strong and experienced team on GPEx to lead us through this uncertain period.

I joined the party in 1983 and have been active ever since. I’ve served on GPEx and GPRC, as well as the earlier Green Party Council. I was national Elections Coordinator during the historic 2010 campaign that elected Caroline Lucas to Brighton Pavilion, and I was part of the small South West team that elected Molly Scott Cato to the European Parliament in 2014. In 2000 I managed London’s campaign for the first Mayoral and London Assembly elections, giving us our first three seats on the Assembly. 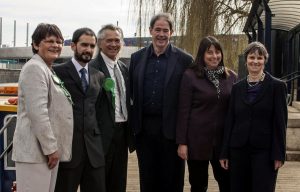 Last year I was delighted that we increased our general election support to more than a million votes, including re-electing Caroline to her Brighton Pavilion seat, but immensely frustrated that this didn’t translate into more MPs. This must improve if we are to see the changes to society that we all crave.

I’m now working with staff and colleagues, pulling together strategies for election success over the next four years. This includes clinical analyses of the data following the 2015 and 2016 elections, identifying promising prospects for parliamentary elections, and considering how we can build on these for a real breakthrough. We are looking at where the Remain votes were dominating in the referendum, cross checking against other indicators, and have begun deliberations on possible alliances with progressive parties that share our vision and our values.

I’ve been a candidate in countless local, regional and general elections, and understand the stresses of representing the party on doorsteps and public platforms. It’s vital that we increase our representation on local and regional authorities; this is where we begin to make a difference to communities, and where we will construct a political consensus for our vision of a sustainable, peaceful and socially just society. With this in mind, I am working with the Chief Executive to inject some meaningful support into regions and local parties that will enable them to build effective and successful local campaigns.

I will continue to work with the Elections Committee, maintaining dialogue between regional Election Coordinators, gaining useful feedback from the regions on election plans and strategies.

So I ask for your vote to serve again, and continue to steer our elections through this critical time for the party and the country. Please visit my Facebook page or email me to question me about any issues that concern you.